Pilates Exercises Where the Elbows Are in Supination

Elbow supination in Pilates occurs when your palms are either turned up or facing the front — anterior — of your body. This position is also commonly referred to as forearm supination. A comparable exercise would be the classic biceps curl. When using this position, muscles in the front of your body such as the chest and biceps are engaged, which contributes to a well-rounded workout. The benefits of performing Pilates exercises correctly in this position may result in greater range of motion and functioning in the upper body. You can do the exercises on a floor mat or a Reformer. 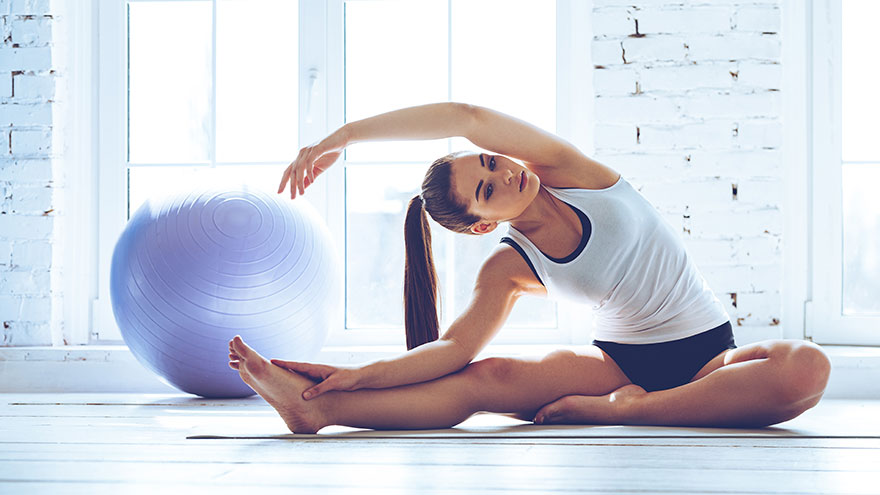 One of the most basic of Pilates exercises, arm circles involve several movements linked together to form a continuous circular motion. The benefits of this exercise include upper-body strengthening and greater awareness of a neutral spine. Lie in a supine position with your hips and knees flexed at 90 degrees and your arms raised straight up to ceiling. Draw your arms straight toward the floor. Raise your arms or hold them out to your sides with your palms turned slightly upward. This is the point of elbow supination. Finally, move back to the starting position.

The Tree Hug involves a seated posture with slightly bent elbows. Benefits include upper-body strengthening and core stability. Sitting tall with a straight back, extend your legs or cross them. Hold your arms at shoulder height with your elbows raised slightly higher than your hands. Keep your shoulders down with the weight concentrated in your armpits. Your palms should face in and your hands should touch while maintaining the space between your arms and chest. Elbow supination is maintained throughout the exercise. Imagine hugging a big tree trunk. Return your arms to the open position without letting your elbows extend past your shoulders.

The Full Rowing Back benefits your core and strengthens your upper body. It is performed seated with your legs fully extended and your spine in a neutral position. Raise your elbows to your sides and have your palms face your body with your hands touching. Maintain the distance between your arms and torso as your roll your spine — keeping your back rounded — toward the surface one vertebra at a time. After coming to the end point of this movement, your arms should be opened away from your chest and fully extended behind you with your palms facing up, as your spine rounds forward. Return to the starting position.

Perhaps the best known example of a Pilates elbow supination exercise, the Bicep Variation may be done either seated or kneeling for a greater core and postural challenge. This exercise engages your upper extremities resulting in greater strength. In this movement, your elbows are raised to shoulder height and flexed to 90 degrees with your palms facing your body. Your elbows remain in supination throughout the duration of the movement. Fully extend your arms without dropping your elbows. Your palms should face up toward the ceiling. Your biceps should stay engaged throughout the entire motion. Return to the starting position.

Does Pilates Start With Isometric Movement?