Pilates is the creation of Joseph Pilates, who developed a novel exercise program in England during World War I and later in Germany. As Balanced Body explains, Joseph then emigrated to America in 1926 and opened a studio in the same building occupied by the New York City Ballet, working with many of its dancers. After his death in 1967, former students opened studios and popularized Pilates across America. Alissa Wyatt trained with some of Joseph’s leading disciples. Her classes and videos hew to the classical methods developed by Joseph about 100 years ago, focusing on core strength and flexibility. 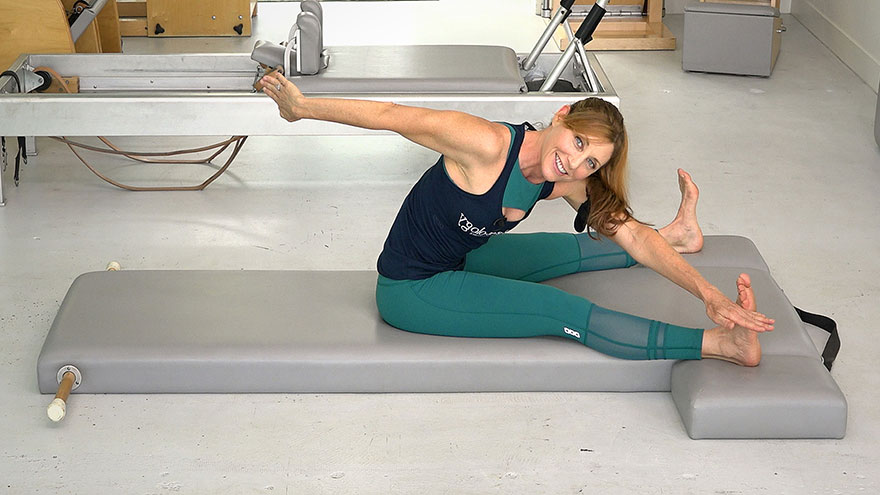 As her website explains, Wyatt is “dedicated to recording, preserving and spreading Joseph Pilates’ original work worldwide.” In addition to her studio in California, where she teaches everyone from Olympic athletes to models to “real people who want to look and perform at their absolute best,” Wyatt sells videos targeted to beginning, intermediate and advanced Pilates students. She’s also the creator of “Pilates for Men.” Her instruction is designed to provide a “personalized, vigorous, whole-body workout that creates a long, lean, balanced physique.”

Praise From a Pro

Personal trainer and fitness specialist Nicole Crawford, writing at Balance Muscle, gives Wyatt’s videos very high marks. “If you’re a Pilates enthusiast looking for a classic workout that will challenge you, don’t pass up these workouts.” The focus is solely on mat work, so you don’t need any equipment except for a high-quality mat. The Intermediate DVD is aimed at people with prior Pilates experience and core training. Crawford describes the Advanced DVD as “a work of athletic art,” well-suited for very experienced Pilates students and even Pilates instructors. The sequence of exercises for both videos follows the original teachings of Joseph Pilates, with more difficult modifications for advanced students. The videos are plain vanilla, with no music, little flash and a focus on the proper execution of the movements.

The “Los Angeles Times” reviewed Wyatt’s 2004 “Pilates for Men” DVD and says it might dispel the notion that Pilates is mainly for women. Reviewer Jeannine Stein describes it as a fast-paced, 30-minute video featuring basic Pilates moves, such as the hundred, double-leg stretch and corkscrew. Wyatt introduces each exercise and explains its importance. The exercises in the video are geared toward developing the strong abs men want and the increased flexibility that men often lack and need.

Out of eight reviews on Amazon.com, seven people who bought “Pilates for Men” gave it five stars. One reviewer, a veteran of Pilates classes, said it greatly improved his core strength and flexibility. He was especially impressed at the focus on specific men’s issues, such as tight hamstrings. Although there are only a small number of customer reviews for Wyatt’s other DVDs, almost everyone gave them high marks. The only negative comments focused on the less-than-steller quality of the production values.