Refrigerators use compressors and condensers to produce cool air through a cycle of phase change. This cycle is regulated by a thermostat and a defrost timer. The thermostat senses temperature inside the refrigerator.

The defrost timer temporarily overrides the thermostat and prevents the refrigerator from running for a small amount of time each day. A failed defrost timer presents a problem, but is relatively simple to fix. 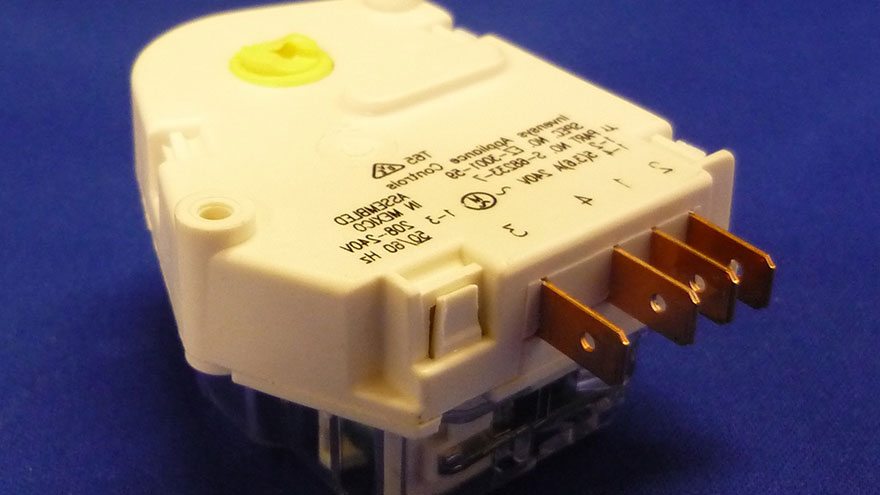 This ice prevents air from circulating around the coils and cooling them properly. Besides making the refrigerator run less efficiently, this can prevent it from being able to produce cool air at all. The defrost timer ensures that the refrigerator stops running on a regular basis and engages a heating element to warm the coils and remove ice.

Most of the time when a defrost timer fails, it is in cooling mode. This is because the refrigerator is in its cooling mode most of the day, allowing it to run as needed based on input from the internal thermostat.

Diagnosing a faulty defrost timer can be difficult since most of the symptoms are the same as those you can expect to see when another element in the refrigerator fails.

To determine that the problem is in fact the defrost timer, check the condenser coils for a buildup of ice. Locate the timer and turn the dial on its side. This will cause the refrigerator to enter the defrost cycle if there is ice on the coils, or the cooling cycle if it’s stuck in defrost mode. If the status of your refrigerator doesn’t change after turning the dial, the problem lies elsewhere.

Defrost timers can fail when they wear down from use, experience a mechanical breakage or suffer electronic failure through bad contacts or wiring. Whatever the case, replacement is usually the simplest and most affordable option.

The location of the defrost timer varies based on the model of refrigerator, but it is always a small box with a multi-pronged plug and a dial on the outside for manual control. Remove the defrost timer by pulling it out of its plug and determine its model number to find a replacement that matches.

How to Decode a Failure to Deliver an Email