Inside the tropical rainforest, thousands of different species of plants and animals live in one of the most important ecosystems on the earth. Tropical rainforests are located between the Tropic of Cancer and the Tropic of Capricorn, which lies along the equator in continents including Asia, Australia, Africa, South and Central America and the Pacific Islands. 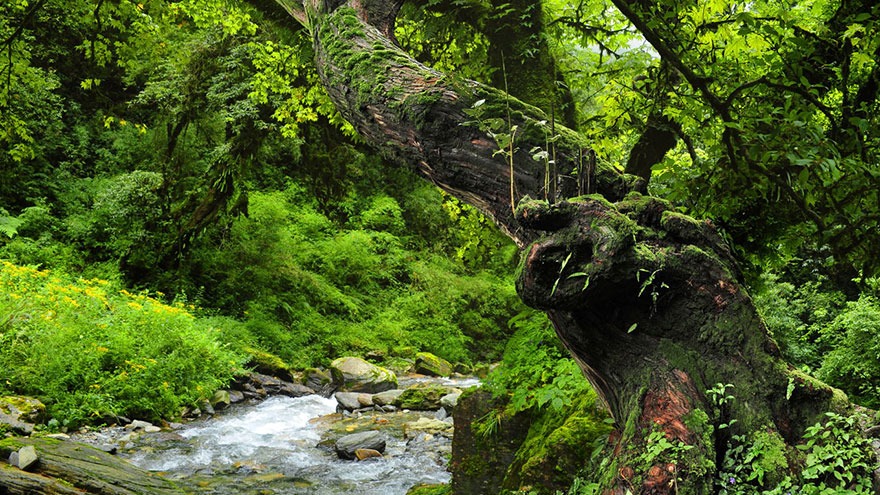 Because the rainforests are close to the equator where the sun shines most directly, the temperatures are very warm. However, the cloud cover and the amount of humidity due to the large amount of precipitation help to keep the temperature reasonable.

Five vegetative layers exist in the rainforest — the overstory, canopy, understory, shrub layer and ground level. The tall trees of the rainforest make up the overstory. Because of the height of the trees, the climate they live in is different than that inside the forest. The canopy is the thick layer of leaves that act as a shield from the sun.

The protection allows for both animals and humans to more easily walk through the rainforest, according to The Recycling Facts Guide. The understory consists of the branches and leaves under the canopy, and the shrub level includes the shrubs beneath the understory. The plants on the ground level are minimal because most of the sunlight is kept away from the ground by the canopy. Because of the large rain amounts in the rainforest, the plants adapt to require much larger amounts of water to survive.

The animals in the tropical rainforest make up about 30 percent of the world’s wildlife, according to Rhett Butler, founder of Mongabay.com. The majority of the mammals that live in the rainforest are bats and rodents, but there are many types of monkey and jungle cats as well. There are more than 1500 species of birds that are characterized by bright colors.

The insects in the forest thrive because of the damp climate and make up 90 percent of the animal species there. Butterflies, ants and beetles are the most prominent insects. Snakes and lizards make up the majority of the reptile population in the forest. Frogs are the most common amphibians.

Every plant and animal in the ecosystem is important to the survival of the forest as a whole, according to Pollution Prevention.

If one of the larger mammals is hunted and goes extinct, the small mammals they used to prey on would thrive, resulting in plant loss. Even the smallest loss could lead to damage of the ecosystem that cannot be recovered.

How to Compare Dating Sites