How to Hike the Maryland Heights Trail in Harper’s Ferry, West Virginia

These two trails are the Overlook Cliff Trail and the Stone Fort Trail. Visitors can view Civil War ruins and artifacts while hiking these trails. The hike along the trails is strenuous. 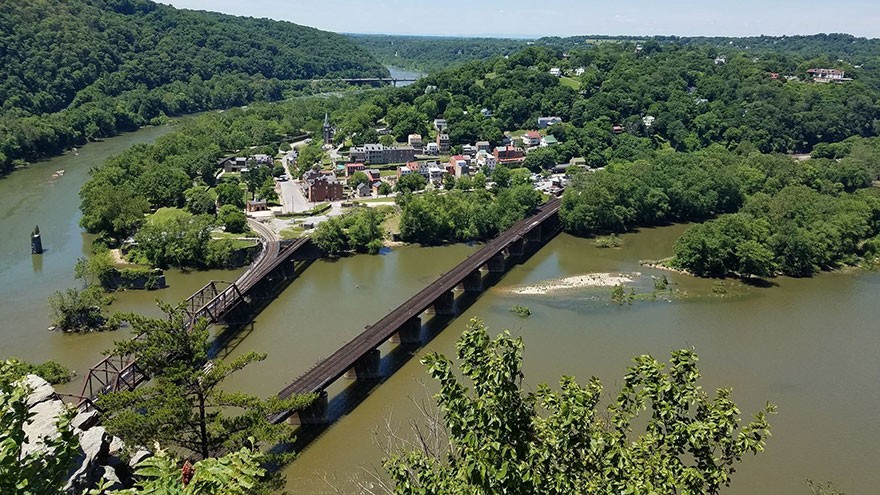 1. The beginning and end of both the Overlook Cliff Trail and the Stone Fort Trail are the same.

2. The trail starts out in Harper’s Ferry at The Point in Lower Town. Cross the Potomac River using a foot bridge at the sight of the old B&O; Railroad bridge that John Brown used in his raid of 1859.

3. It continues along the Chesapeake & Ohio Canal, which was built along the Potomac River from Washington DC to Cumberland Maryland. There were 74 lift locks built along the canal. Lock 33 can be seen along this trail.

4. The first Union fortification, the Naval Battery, can also be seen along the combined trail at Maryland Heights. The Naval Battery was built in 1862.

5. The Overlook Cliff Trail is the shorter of the two trails, at just over 4 miles round trip from the foot bridge. It takes approximately 3 hours to hike this trail.

6. The trail follows one of the many old military roads at Maryland Heights.

7. Before returning to the foot bridge, the Overlook Cliff Trail passes through the Cliffs. The Cliffs offers one of the best views of Harper’s Ferry, overlooking the convergence of the Potomac and Shenandoah rivers.

9. From the Naval Battery along the combined trail, follow another old Civil War military road that is the Stone Fort Trail. Markers along the trail route point the way.

10. Continue along the trail to the Charcoal Hearth, one of more than 50 hearts that were built on Maryland Heights. During the early 1800’s, these hearths were filled with wood and covered with dirt, leaves and charcoal dust and then lit. After burning for 10 days, the pile was reduced to charcoal.

11. Approaching the Stone Fort, visitors will see remnants of platforms and foundations that indicate the location of a Union camp erected during the Civil War.

12. Walls and battlements were the first line of protection for the Stone Fort. These fortifications were called the Interior and Exterior Forts.

13. The Stone Fort was designed by the Union at the highest point in Maryland Heights. The structure was never finished. Originally designed as a blockhouse for the infantry, it was later turned into a storage area and commissary.

15. At this point, the two trails again converge, and hikers who took the Stone Fort Trail are offered the same views from the Cliffs as those who hiked the Overlook Cliff Trail.

How to Have a Christian Wedding Night

How to Comfort Your Wife As She Grieves