Trampoline Exercises for the Obese

Obese individuals should take extra care when starting an exercise program because of the stress that they’re putting on their joints and other musculoskeletal structures. High-impact exercises like jogging on a treadmill can be hard on the ankles, knees, hips and back because of the loads placed on these structures. Exercising on a trampoline is ideal for obese individuals, however, as it allows them to increase their heart rate and burn calories while the trampoline absorbs a significant amount of the landing impact. 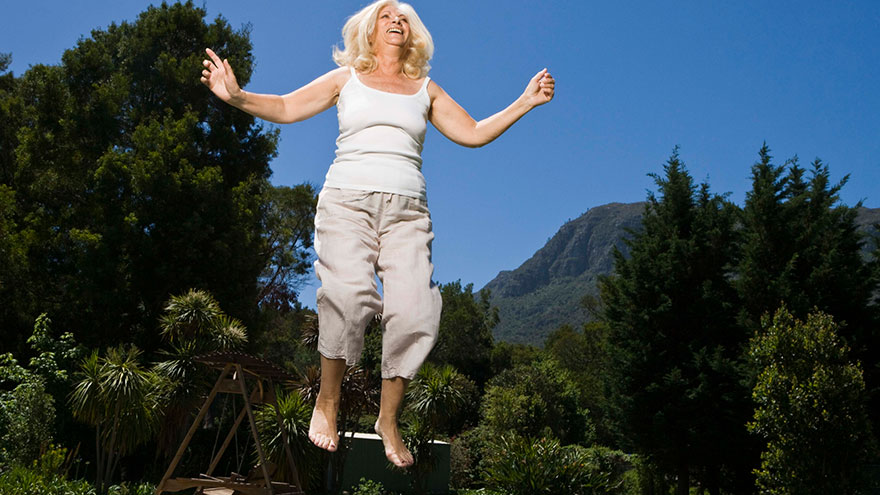 The goal of your trampoline workout is to keep moving the entire time, which will keep your heart rate elevated and help you burn more calories. Jumping on a trampoline has the potential of being as effective or more effective than running. Obese individuals have a greater risk of losing their balance and should thus keep trampoline exercises simple. Obese individuals start out with low-intensity aerobic exercise for 30 minutes or more. If you’re unable to keep bouncing for 30 minutes straight, you can break that time up into shorter sessions. You may also want to consider a mini trampoline that has a handrail for support.

Warming Up With Basic Hops

Before you begin more intense exercises, hop for about five minutes to increase body temperature and blood flow. Take off and land on both feet, keeping them shoulder-width apart. Keep the intensity low so that you’re barely getting off the trampoline with each hop; primarily focus on flexing your feet in between jumps. After you get used to the motion, try to incorporate arm swings while you jump.

After you’re warmed up, increase the intensity of your workout with an array of hops, including the two-foot hop, side-to-side hop, twist hop and jumping jack hop. Two-foot hop is similar to the hop you did during the warm-up, but you try to jump higher off the trampoline. Side-to-side hop is like the two-foot hop, except you keep your feet together and jump left and right. The twist-hop involves hopping while keeping your feet pointed forward but twisting your waist left and right. For jumping jack hops, land with your feet wide apart, jump again and then land with the feet together.

The Best Cardio Exercises for Men Over 70