Versatile rice pilaf has made its way into cuisines all over the world. Combining rice, vegetables and a meat all in one bowl, rice pilaf can be a meal in itself or a simplified version can serve as a side dish. Pilaf or pilau originally comes from the Persian word, pilav, and the dish was brought by Arabs migrating to East Africa. An African pilaf distinguishes itself with its spices, meats and vegetables. 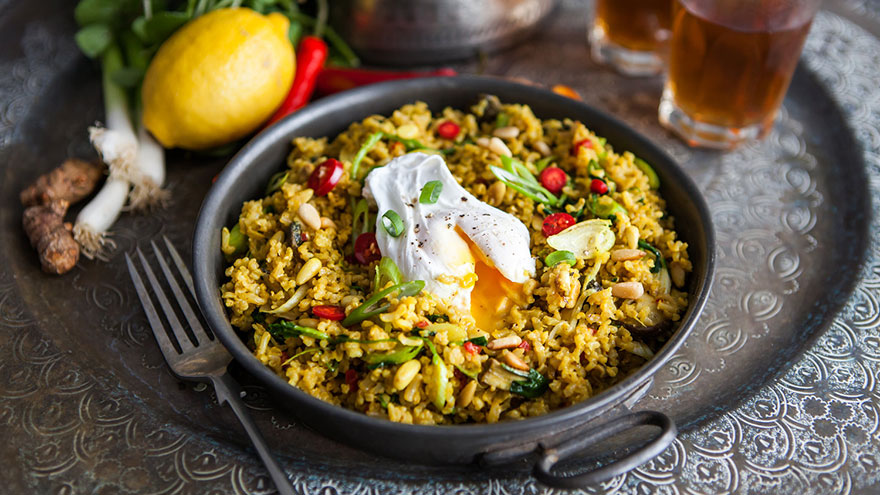 The root of rice pilaf is seasoned rice, so the spices are the essential element of making an African-style rice pilaf. Cloves, cardamom, cinnamon, coriander and cumin are some of the spices often used in concert with garlic, fresh ginger and black pepper. The spices are either ground or tied in a bag and steeped in water, then mixed with the rice, or sometimes with the meat, to enhance the flavor as it cooks. Any combination of these spices can be used to achieve an African-style pilaf.

Adding meat is especially important if you plan to serve the pilaf as a main dish. While modern recipes include chicken or shrimp, more traditional recipes call for goat, mutton, beef or fish, depending on the region in Africa the recipe comes from. Meat preparation usually involves cutting into small cubes and frying or boiling. In Somali pilaf, called isku dhex karis, meat is the focus of the dish, supported by rice that is seasoned and cooked in a tomato base.

The vegetables most often added to African-style pilaf are onions, tomatoes and potatoes. Occasionally, bell peppers are included. While these are hardly exotic vegetables, infused with the potent combination of spices, they result in a distinctive African flavor.

Some African-style pilaf recipes suggest layering the cooked rice, vegetables and meat in a baking dish, and baking it all together for 10 to 20 minutes. As with any casserole, this extra step helps evenly disperse the flavors through the pilaf.