Cuisines around the world feature a number of complex rice dishes, ranging from Iran’s jewel-like pilafs to the creamy smoothness of Italian risotto. In West Africa, the signature dish is called jollof rice. It’s a hearty and colorful workaday staple, similar in principle to rice dishes eaten throughout the Latin countries and parts of the American South. It can be eaten with a wide range of other dishes, depending on your mood and budget. 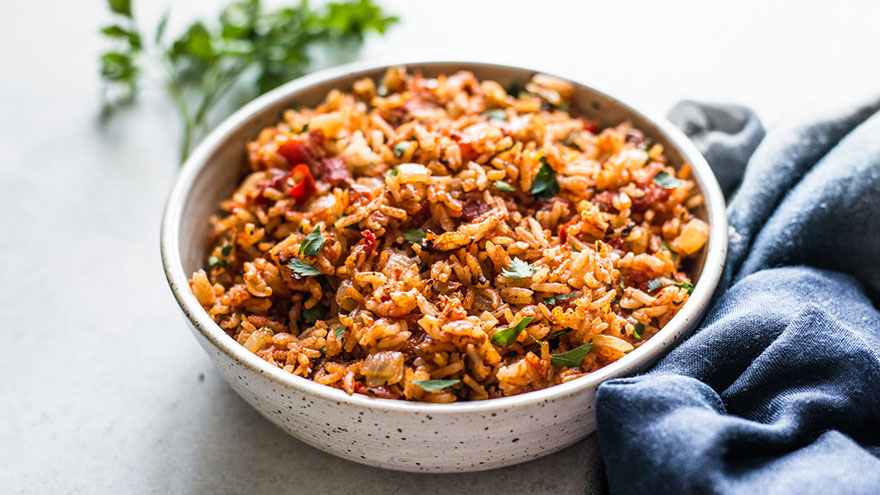 Reduced to its simplest elements, jollof rice is essentially white, long-grain rice cooked with tomatoes and a few aromatic ingredients. The tomatoes can be pureed to provide an evenly tinted rice dish or left diced or in pieces to provide a visual and textural contrast. Add water, meat broth or chicken broth to make up the quantity of cooking liquid you’ll need. From there, you’re free to improvise. Most recipes include shredded or finely chopped onion, but garlic, ginger, fresh herbs, sweet peppers, hot chilies, shredded carrots, green peas and many other ingredients can be added. There are as many versions of jollof rice as there are cooks, so feel free to tailor the result to your own tastes.

If you’re looking for authenticity, the most common accompaniment for jollof rice is called dodo. It has nothing to do with the extinct bird of that name; it’s simply a local word for plantains or cooking bananas. They’re as high in starch as conventional bananas are in sugar and a cherished side dish throughout the world’s tropical zones. Peel the plantains and slice them at a slight diagonal, making oblong pieces 1/4-inch to 1/2-inch thick. Heat a skillet to medium temperature, and fry the plantains in oil or butter until they’re deeply golden on each side. Serve them generously alongside each portion of rice.

There are two broad approaches to rounding out your meal of jollof rice. One method is to cook meats directly in the rice dish, as you would for Spanish paella or a Louisianan jambalaya. Pork and chicken are often commonly stewed first with the tomatoes and other aromatic ingredients, creating a richly flavorful broth. Then the rice is added, cooking together with the meats until both are fully cooked and tender. Additional liquid can be added if necessary, but the rice should be dry rather than wet or mushy at the end of your cooking time. If you opt for seafood — equally traditional in coastal regions of Africa — add it at the end, so it doesn’t overcook.

Cooking the meats separately is a second option, making it possible to prepare a basic batch of jollof rice and use it as the basis for varying meals. You can still stew or slow-cook the meats if that’s your preference, using the broth in the rice or creating a separate sauce to spoon over the finished dish. Alternatively, you can grill the meats or seafood for a lighter or more savory meal, serving them atop the rice with or without a sauce. For a lighter or vegetarian option, you can also top the dish with grilled vegetables.

How to Cope With Negative Feelings During Pregnancy