Senegal, a coastal country in West Africa, has a bold, spicy cuisine that is influenced by foods from Morocco, France, Portugal and Vietnam. The regional cooking features a variety of vegetables, seafood and meats that are flavored with peanut, ginger, tamarind and Scotch bonnet peppers. The other distinctive flavorings used are gejj; dried, salted and smoked fish and yeet, a dried, fermented shellfish. These pungent ingredients season a number of foods, sauces, stews, and condiments with a strong, savory fish flavor. 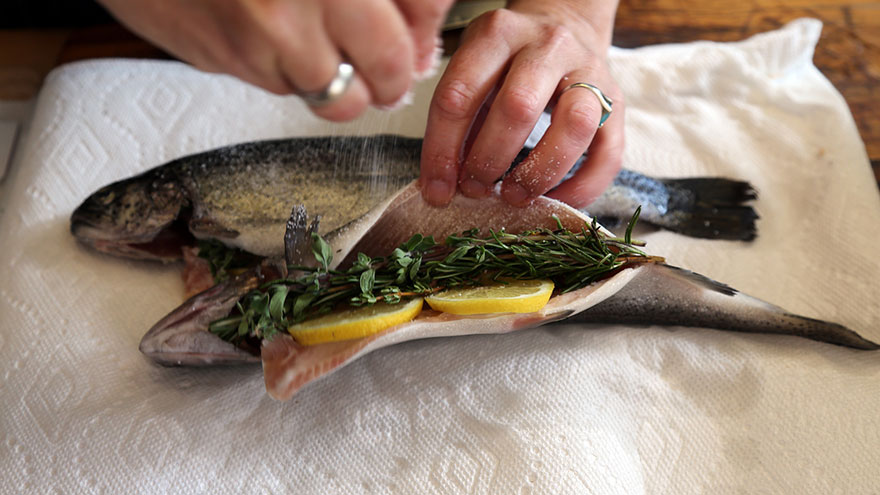 Gejj and yeet are used in much the same way bacon or anchovies are used as flavorings in other cuisines; by infusing the foods with a deep smoky flavor. Gejj, made from cod or other firm white fish, is dried, salted, and then fermented. Likewise, Yeet is dried-and-fermented sea snails or shellfish. The ingredients are also used as an umami flavor booster. Tamarind is usually used in combination with these ingredients as its sweetness cuts through their pungency.

Alternatives to Gejj and Yeet

Drying and salting fish is a traditional way of preserving a bountiful catch of seafood for later use. Dried fish and shellfish can be found at African and specialty grocery stores. But if they are unavailable, any dried seafood that has been salted or fermented can be used. Dried fish is often called salt fish, stockfish or salted cod. Dried shrimp is also used in many different cuisines. Since the migration of the Vietnamese to West Africa in the 1950s, the Senegalese also use Asian fish sauce as a substitute, even in the treasured national dish; thiéboudienne.

Thieboudiene, or ceebu jen, is a boldly spiced fish and rice stew that features a tomato base and a plethora of vegetables. Any type of firm white-fleshed fish such as grouper or snapper can be used.

Create a rof, or stuffing, for the fish by mashing together onions, garlic, parsley and dried chilies. Poke a few holes into the flesh of the fish and stuff it with the mixture. In a large pot, make the sauce by sauteing onions and peppers and stirring in tomato paste, adding water to thin it. Arrange the fish in the pot. Add tamarind and Scotch bonnet peppers. As the stew continues to simmer, add in hunks of gejj and yeet. Mix in additional vegetables such as pumpkin, squash and cauliflower and add rice, cooking until tender.

Soupoukandia is a sort of gumbo featuring loads of fresh seafood and vegetables. Scotch bonnet chili peppers give this soup its heat, while dried and salted fish add a depth to the rich broth. The dish is traditionally served with chunks of fresh fish such as snapper and large prawns, though any fish or seafood can be substituted. Onions and garlic are sauteed in rich palm oil and then okra and eggplant are added.

Top off with fish stock or broth and simmer until the soup had thickened and the okra has fallen apart. Add the seafood and cook until fish is cooked through. Serve ladled into bowls over rice.

How to Create a Pregnancy Memory Journal

How to Bond With an Unborn Baby