The Basset Hound was a popular breed of dog in Europe, used primarily for the trailing of hare, rabbits, and even deer. The early breed of the Basset Hound dates back to the late 16th century where the dog was bred to be slow moving but highly capable of smelling prey. By walking slow but with precise smell, hunters and trackers could follow behind without any difficulty whereas other breeds were too fast.

Then in the mid part of the 19th century, a somewhat different version of the same dog was produced in France. These dogs were developed in two series with the first being a lemon and white colored dog that was prone to knuckling and the second series, a beautiful tri-color that featured gentler or softer eyes, a more prominent jaw line, narrower head, and dome-shaped skull. Additionally, this second version had an unusual look that provided far more expression.

Becoming more and more popular over the years for hunting, the Basset Hound finally made its way into the show ring in 1875 in England. However, just a few years later, the United States also took note of this new and interesting breed.

Although the Basset Hound will forever be linked to its amazing hunting abilities, it is also an excellent dog used today for search and rescue efforts, conformation, field trials, and obedience. 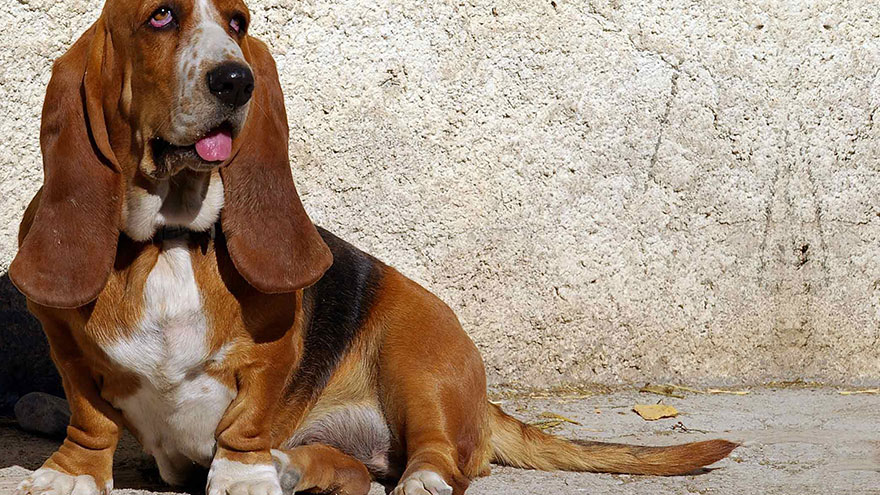 If you are looking for a calm companion, the Basset Hound actually makes a great choice. This particular breed is extremely loyal to its family, has a wonderful personality, is eager to please, and gets along well with other animals and children. The only real drawback is that the Basset Hound can be a little bit on the stubborn side but other than that, the breed is well rounded. Keep in mind that while the Basset Hound loves to play and be with people, it does need some down time to settle down.

Although this breed is not as active as you might find with other breeds, the Basset Hound still enjoys playing and daily exercise. In fact, most Basset Hounds love to take long walks in the park or even go on hikes. The barrel shaped body of this dog can be deceiving, often leading people to believe they are lazy and fat but in truth, the Basset Hound is quite active, just with an odd shape.

Now, while you can teach a Basset Hound basic commands by using the reward system, they are not good with memory. In other words, unless you have a treat to offer, this dog will simply forgot what it was taught. This type of manipulation is actually quite clever, but does lead to some challenges when it comes to obedience training. Then, if your Basset sees something he wants, he will likely bark or howl to get your attention. 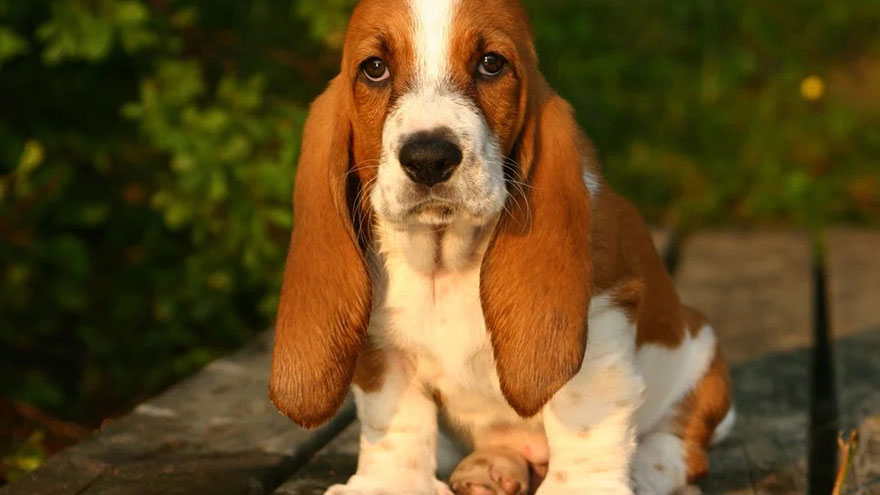 As mentioned, the Basset Hound has an unusual shape, which can be deceiving. Typically, both male and female will measure between 13 and 15 inches at the withers. For weight, the breed can range anywhere from 45 to 65 pounds, giving it the stocky build. As long as the dog is not allowed to become overweight, he will have a short but strong appearance.

The hair of this breed is short and smooth. As far as color, the Basset is available in open red and white, which means red spots on white fur, closed red and white, or solid red with white feet and tails, a lemon and white color, or tri-color, which includes black, tan, and white, the most common. Although you might see some Basset Hounds with a blue or grayish coloring, the American Kennel Club considers this a flaw.

The most prominent feature of this breed is the sagging skin and drooping eyes, making the dog look as if he were sad or tired. Other features include low, long ears, strong, stocky necks, and long tails that taper and curve just slightly. The heavy looking body set on four short legs sets the Basset Hound apart from other breeds, adding to its charm. 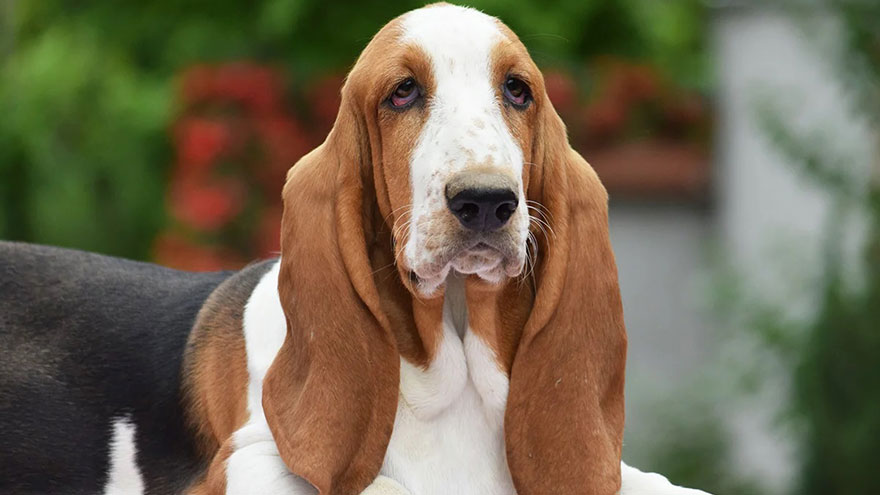 When buying a Basset Hound, you need to get him set up on a healthy food schedule. This means teaching him from a young age that table scraps are prohibited.

The challenge here is that the Basset will soon expect people food, meaning he no longer wants dog food. Additionally, avoid feeding this breed any type of chicken, pork, and fish bones, especially when a puppy, which can become lodged in the throat.

Set up a regular feeding time, and place for your dog and always choose quality food. The one thing to remember with a Basset Hound is that they can become obese. Then, due to the structure of the body, this adds a tremendous amount of weight on the legs and back.

To tell if your dog is within proper weight, follow the normal range but you can also stand over your dog, looking down. With this, you should not see the stomach pushing out from the sides. Additionally, while you do not want the ribs to be sticking out, you should be able to feel them during petting.

As far as grooming, not much is required to keep a Basset Hound. However, with the long, droopy ears, you should pay some special attention to keeping them clean, thus reducing the chance of infection.

Typically, using a washcloth and mile astringent to wipe out the inside of the ear is all that is needed. The same goes for the eyes, which are droopy. Because of the structure of the eye, weekly cleaning with a washcloth and water will do.

For the coat, a weekly brushing and bathing is recommended although you could go several weeks for the bath. Other than this, keeping the toenails trimmed and the teeth cleaned is all that is required. 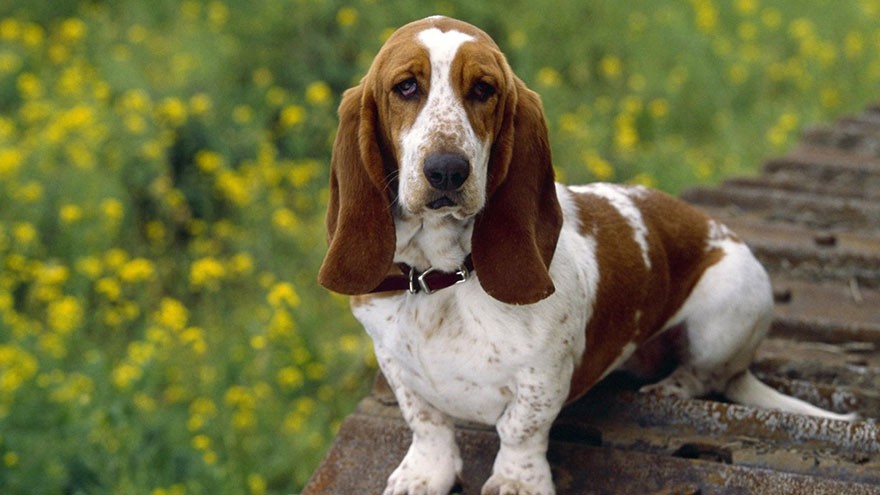 Although the Basset Hound is a somewhat active dog, they do not need an abundance of exercise. In fact, when you buy a Basset puppy, you want to keep the amount of activity to a minimum to avoid causing damage to growing bones and muscles.

Then around age five to six months, provide some downtime for your puppy after training periods or playtime. Keep in mind that Basset Hounds love to walk but with the short legs, they are not fast. Therefore, if you take this breed for a walk, just provide him frequent periods of rest.

Tory has been writing for over 10 years and has built a strong following of readers who enjoy his unique perspective and engaging writing style. When he's not busy crafting blog posts, Tory enjoys spending time with his friends and family, traveling, and trying out new hobbies.